Child labor in the mines of the Democratic Republic of Congo

The Democratic Republic of the Congo (DRC) contains vast and significant mining resources including more than 1100 minerals and precious metals. With such riches, the DRC has the potential to become one of the richest countries in Africa and to guarantee the well-being of its population—including its children. However, despite the availability of these mineral resources, the country is experiencing endemic poverty. Its people live with highly unstable conditions, and children are forced to work in mines, exposed to all sorts of diseases and the possibility of accidental death, while the government and the mining companies that employ them look on in silence.

Working conditions for children in the mines of the DRC

Various mining sites, located principally in the Eastern regions of the DRC (North Kivu and Katanga), employ a significant number of child workers. In fact, the data on Katanga and Copperbelt generally estimate the number of children (under 18 years) at 40% of all workers in the region’s mines.

According to a UNICEF estimate from 2014, roughly 40,000 young boys and girls are used for dangerous mining activities in southern DRC, primarily extracting cobalt.

The working conditions for children at these mining sites is atrocious. Given the same status as adults, they work without breaks and without any basic measures for protection or security. In unbearable heat, with clouds of red dust and weak light, these children dig at depths of 200 to 300 meters and are at constant risk of asphyxiation, rockslides, or other accidental deaths, for a remuneration of 1 to 2 dollars per day. 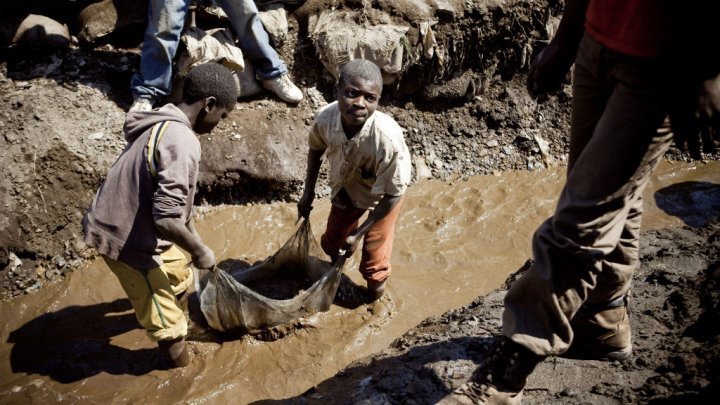 The world market for cobalt is growing rapidly, and the DRC produces more than half of the world supply on its own. Numerous cobalt extraction companies in the DRC employ children as young as 7 years old to extract this mineral by hand or with rudimentary tools and no protective measures. Although the UN has established trade guidelines which emphasize the primary need for companies to respect internationally recognized human rights while conducting their business activities, these companies care little, if even at all, about the conditions under which the cobalt they use is extracted.

An Amnesty International report revealed that, after contacting several companies that supply this mineral, not a single one maintained the minimum requirements for supplying cobalt. In other words, they did not have any strict policy of transparency with respect to the manner by which the cobalt is extracted, by whom, or the manner in which it is transported to them.

Knowing that this country produces more than half of the world’s cobalt, it is a shame that these companies do not care about the thousands of children who die in the rubble of these mining sites…

Mining labor is harmful for children and certainly constitutes one of the worst forms of child labor. Article 32 of the Convention on the Rights of the Child is

clear on this matter: “States Parties recognize the right of the child to be protected from economic exploitation and from performing any work that is likely to be hazardous or to interfere with the child’s education, or to be harmful to the child’s health or physical, mental, spiritual, moral or social development.”

Child labor in mines is carried out under dangerous and unsanitary conditions, exposing them to fatal injuries and diseases. Article 3 of ILO Convention 182 also makes reference to work done by these children in mines, characterizing it as “work which, by its nature or the circumstances in which it is carried out, is likely to harm the health, safety or morals of children.”

Stop child labor in the mines of the DRC

Hundreds of children die working in the mines or from pulmonary issues or other diseases caused by their work. A UN study conducted in the DRC showed that between September 2014 and December 2015, more than 80 child laborers met an accidental death in the mines of the old province of Katanga. This number barely touches the reality, since many accidental deaths go unregistered—and not to forget the hundreds of children whose bodies are buried in the rubble.

Child labor in the mines of the DRC is a terrible reality that must be exposed. In spite of various regulations governing mining as announced by the Congolese government and the 2009 law on child protections prohibiting the economic exploitation of children, no concrete or effective measures or policies have been made by the State to eradicate this problem.

Consequently, it is time for the Congolese government and specific mining companies to really look at the issue of child labor in the mines seriously and to establish mechanisms for surveillance and review by inspectors of the mining sites to take bold action to combat this problem, a cancer within the DRC.

Written by : Diane BE

This is a text widget, which allows you to add text or HTML to your sidebar. You can use them to display text, links, images, HTML, or a combination of these. Edit them in the Widget section of the Customizer.
Loading Comments...
Comment
×
%d bloggers like this: